Experience porting Servo to the Magic Leap One

(2018-12-04) We now have nightly releases of Servo for Magic Leap, this post describes the process of making them

We now have nightly releases of Servo for the Magic Leap One augmented reality headset. You can head over to https://download.servo.org/, install the application, and browse the web in a virtual browser. 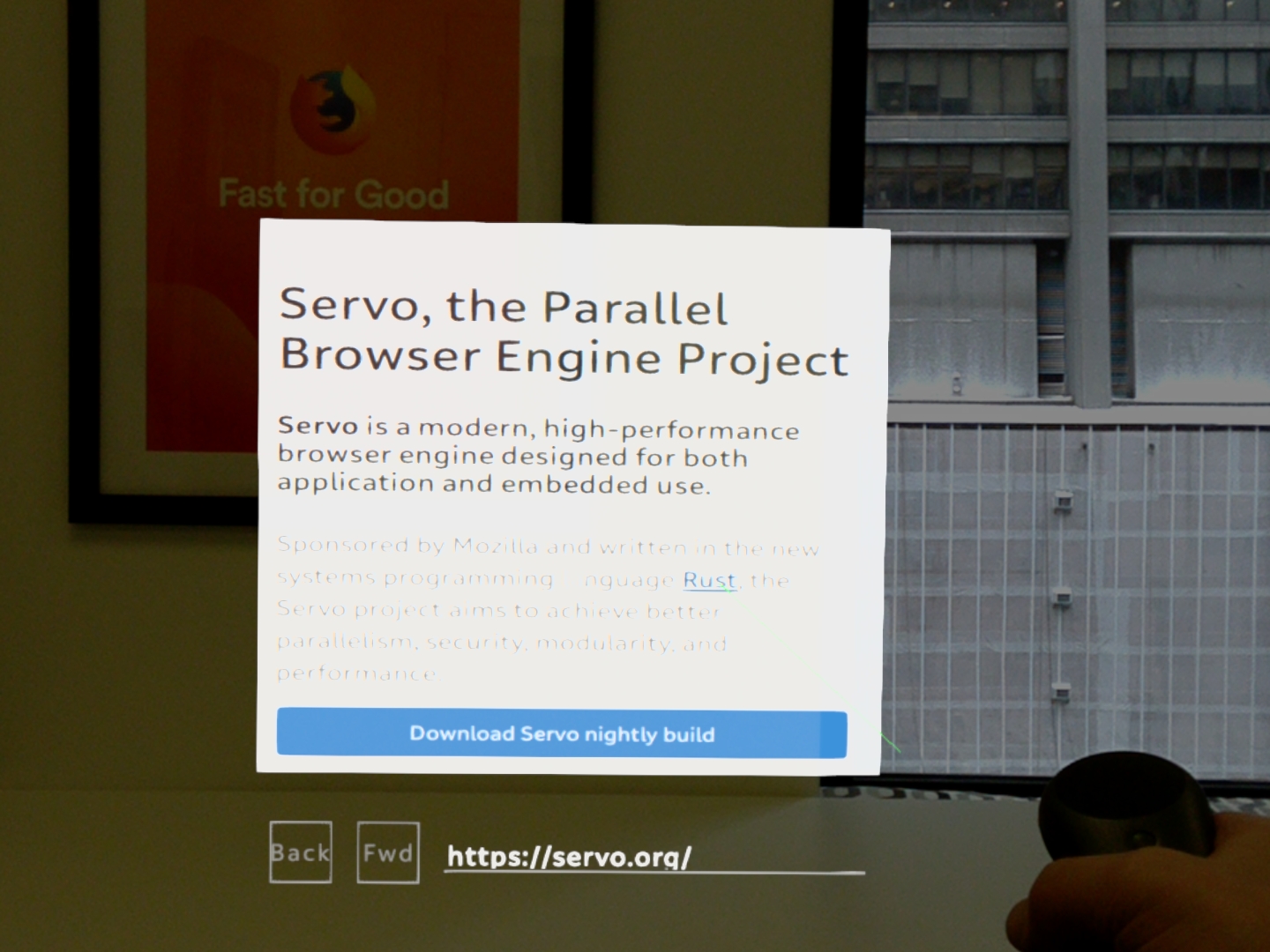 This is a developer preview release, designed for as a testbed for future products, and as a venue for experimenting with UI design. What should the web look like in augmented reality? We hope to use Servo to find out!

We are providing these nightly snapshots to encourage other developers to experiment with AR web experiences. There are still many missing features, such as immersive or 3D content, many types of user input, media, or a stable embedding API. We hope you forgive the rough edges.

This blog post will describe the experience of porting Servo to a new architecture, and is intended for system developers.

Magic Leap under the hood

The Magic Leap software development kit (SDK) is based on commonly-used open-source technologies. In particular, it uses the clang compiler and the gcc toolchain for support tools such as ld, objcopy, ranlib and friends.

The architecture is 64-bit ARM, using the same application binary interface as Android. Together these give the target as being aarch64-linux-android, the same as for many 64-bit Android devices. Unlike Android, Magic Leap applications are native programs, and do not require a Java Native Interface (JNI) to the OS.

Magic Leap provides a lot of support for developing AR applications, in the form of the Lumin Runtime APIs, which include 3D scene descriptions, UI elements, input events including device placement and orientation in 3D space, and rendering to displays which provide users with 3D virtual visual and audio environments that interact with the world around them.

The Magic Leap and Lumin Runtime SDKs are available from https://creator.magicleap.com/ for Mac and Windows platforms.

The Magic Leap library is built using ./mach build --magicleap, which under the hood calls cargo build --target=aarch64-linux-android. For most of the Servo library and its dependencies, this just works, but there are a couple of corner cases: C/C++ libraries and crates with special treatment for Android.

Some of Servo’s dependencies are crates which link against C/C++ libraries, notably openssl-sys and mozjs-sys. Each of these libraries uses slightly different build environments (such as Make, CMake or Autoconf, often with custom build scripts). The challenge for software like Servo that uses many such libraries is to find a configuration which will work for all the dependencies. This comes down to finding the right settings for environment variables such as $CFLAGS, and is complicated by cross-compiling the libraries which often means ensuring that the Magic Leap libraries are included, not the host libraries.

The other main source of issues with the build is that since Magic Leap uses the same ABI as Android, its target is aarch64-linux-android, which is the same as for 64-bit ARM Android devices. As a result, many crates which need special treatment for Android (for example for JNI or to use libandroid) will treat the Magic Leap build as an Android build rather than a Linux build. Some care is needed to undo all of this special treatment. For example, the build scripts of Servo, SpiderMonkey and OpenSSL all contain code to guess the directory layout of the Android SDK, which needs to be undone when building for Magic Leap. 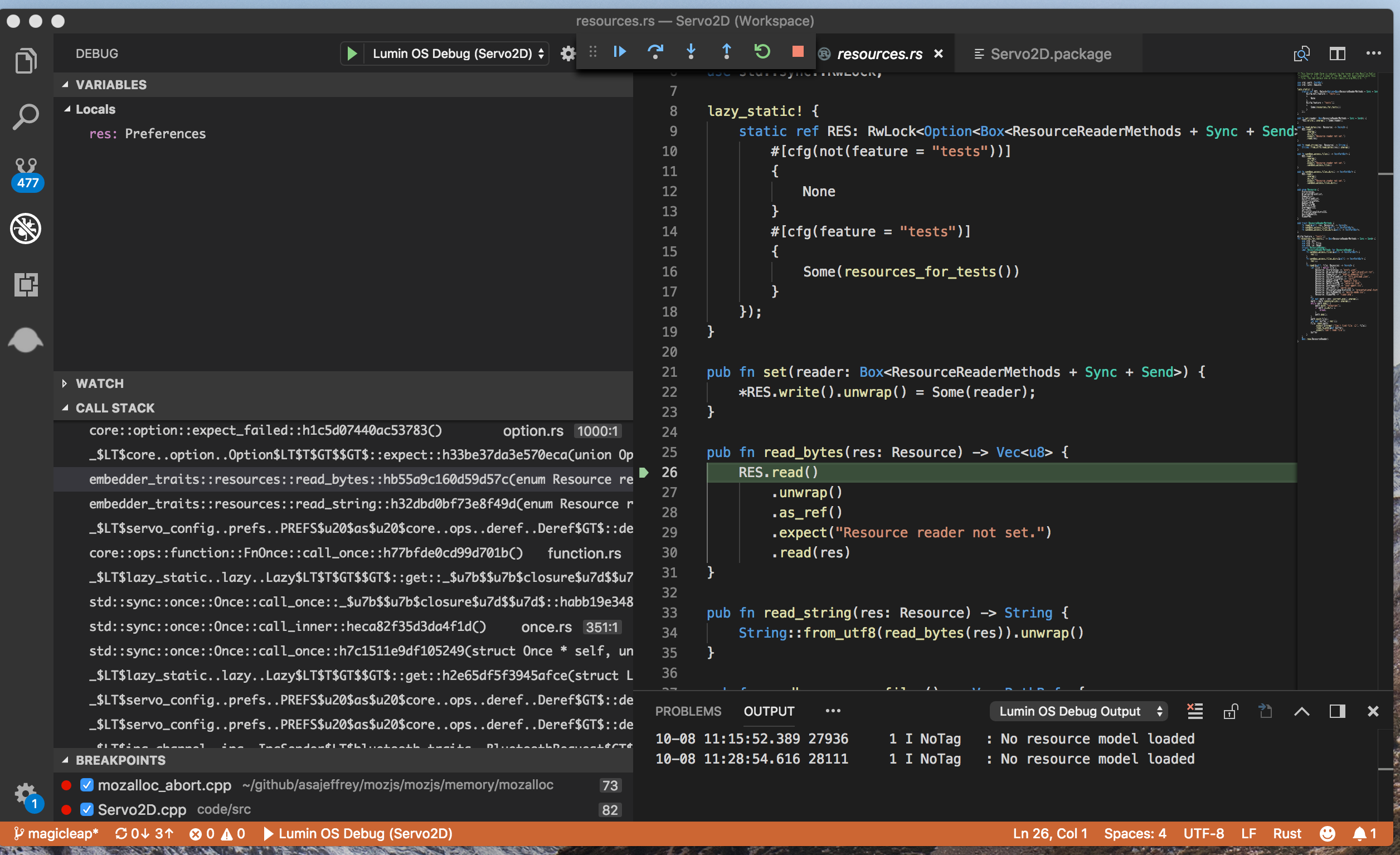 One thing that just worked turned out to be debugging Rust code on the Magic Leap device. Magic Leap supports the Visual Studio Code IDE, and remote debugging of code running natively. It was great to see the debugging working out of the box for Rust code as well as it did for C++.

The first release of Servo for Magic Leap comes with a rudimentary application for browsing 2D web content. This is missing many features, such as immersive 3D content, audio or video media, or user input by anything other than the controller.

Landscape applications can be designed using the Lumin Runtime Editor, which gives a visual presentation of the various UI components in the scene graph. 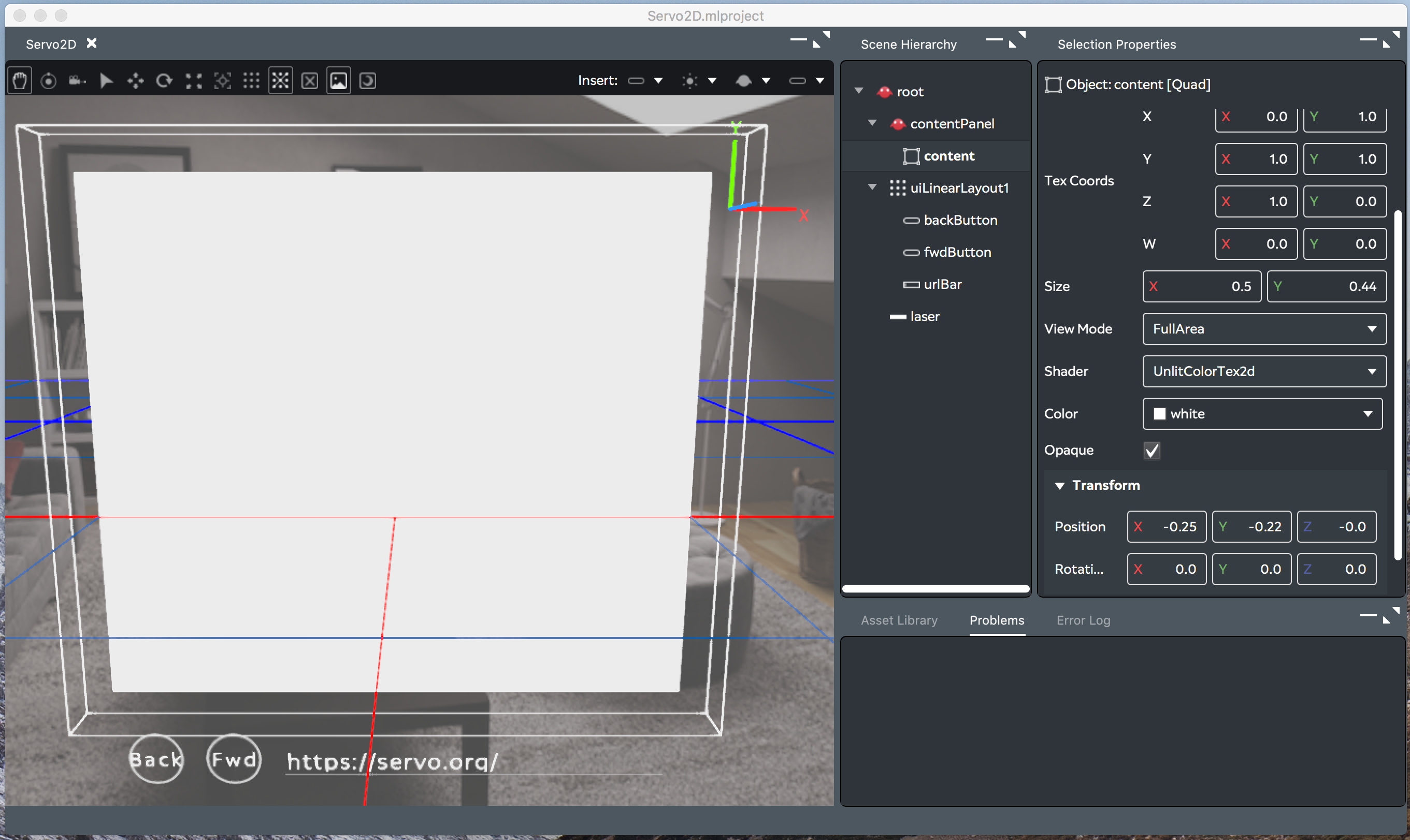 The most important object in Servo’s scene graph is the content node, since it is a Quad that can contain a 2D resource. One of the kinds of resource that a Quad can contain is an EGL context, that Servo uses to render web content. The runtime editor generates C++ code that can be included in an application to render and access the scene graph; Servo uses this to access the content node, and the EGL context it contains.

The other hooks that the Magic Leap Servo application uses are for events such as moving the laser pointer, which are mapped to mouse events, a heartbeat for animations or other effects which must be performed on the main thread, and a logger which bridges Rust’s logging API to Lumin’s.

The pull request that added Magic Leap support to Servo is https://github.com/servo/servo/pull/21985 which adds about 1600 lines to Servo, mostly in the build scripts and the Magic Leap application. Work on the Magic Leap port of Servo started in early September 2018, and the pull request was merged at the end of October, so took about two person-months.

Much of the port was straightforward, due to the maturity of the Rust cross-compilation and build tools, and the use of common open-source technologies in the Magic Leap platform. Lumin OS contains many innovative features in its treatment of blending physical and virtual 3D environments, but it is built on a solid open-source foundation, which makes porting a complex application like Servo relatively straightforward.

Servo is now making its first steps onto the Magic Leap One, and is available for download and experimentation. Come try it out, and help us design the immersive web!